After years of investigating and construction we are introducing a new microphone system for accordions.

Here is a short description:

The system has 19 mic-capsules. The signal from these are mixed and amplified by electronics mounted on some five small printed circuit boards ( 12 * 120 * 5 and 12 * 60 ‘ 4 mm W/L/H). The whole system is phantom-supplied and the only “external” part is the cable to mixer or stagebox. This cable has a (small) plug in the instrument and two XLR-plugs – these plugs fits nearly all mixers or stageboxes. All cables and plugs are high-quality so you can expect many years of use without problems.

We started production of microphone-systems in late nineteen eighties.
Unfortunately we have no pictures of our first systems so one have to do with this photo – of a very special installation.

The player had two accordions and instead of buying two systems he modified our system. The small black plastic pieces are mini-jacks – in this way he could move the microphone-system from one instrument to the other.

He did all the installation work himself, but we don’t recommends such solutions. All these small (cheap and rather lousy) mini-jacks are very prone to give problems. 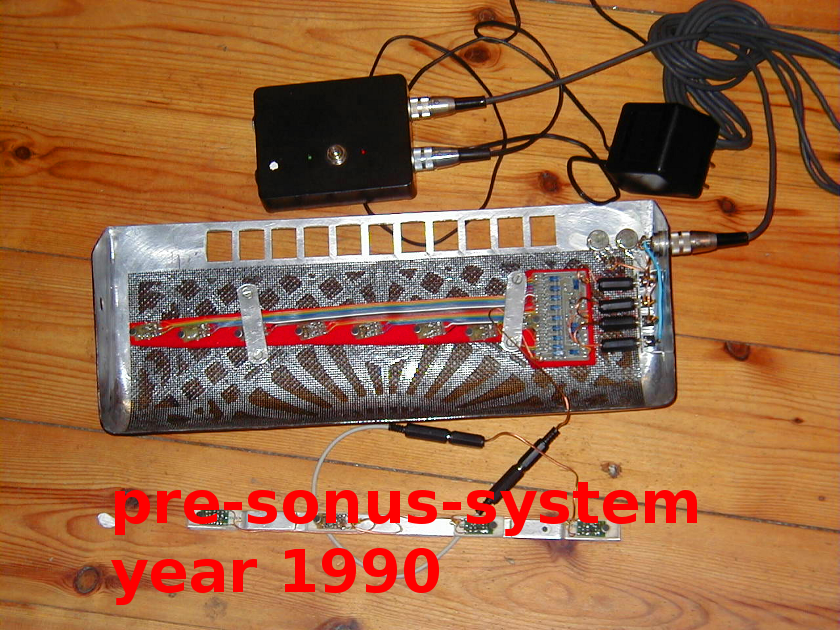 In this instrument our system was installed beside an already installed MIDI-system.

Each microphone has its own amplifier to ensure low impedance all the way from mic-capsules to the PA-system, and because of this it is possible to use both microphone- and MIDI-system at the same time. MIDI-systems are digital systems scanning the MIDI-contacts hundred of times pr second – this generates a lot of electronic noise which often are picked up by analog systems and force the player either to play with microphones or use MIDI.

In the eighties I made a lot of service in recording-studios, most of them well equipped with MIDI-gear (keyboards, synths etc). Many of these units radiated a lot of “radio-noise” which was picked up by the analog circuits – like: microphones, mixing-desk, recording-equipment etc.

So, from our first systems (1987-88)  I did my best to minimize internal noise and maximize immunity to radio-noise (for example MIDI-systems).

We produced many of this system during the nineties – but both production and installation was rather cumbersome. On the other hand – there was no doubt: our concept worked and both musicians and sound-engineers praised the system.

At the Tønder Festival 2002 we introduced the next generation, which we named sonus.dk.

This system was equipped with capsules from a well recommended danish OEM, made to our specs. We changed to XLR-connectors, and introduced a small plug in the bellow-cable making service easier. (Beside this, bas and treble sections now can separated so you can carry them as hand baggage when traveling by airplane)

sonus.dk – system mounted inside the treble

Depending of the instrument we mounted 5-7 microphone capsules in the treble side and 2-3 in the base side.

The “floorbox” was redesigned so the system could be powered from phantom supplied mixing desks.

With small modifications we have sold systems like this since 2002, but through the last years the cost of the customized capsules have increased to a level which only very few a willing to pay. (If interested – contact us by mail)

In 2015 the total a new concept were drawn and the after months of research, design and experiments the first 2.sonus.com – system was installed and the concept proved to be very good.